National and International Actions Against Oil and Gas Pipelines 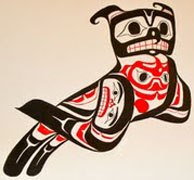 NATIONAL AND INTERNATIONAL ACTIONS
AGAINST OIL AND GAS PIPELINES

November 26, 2012 –Actions are taking place across Canada and internationally on Tuesday November 27 in support of the Unis’tot’en, who grabbed national headlines when they evicted shale gas pipeline surveyors from their territories in the interior of BC last week. The Unis’tot’en have made it clear that no proposed pipelines will proceed in Unist’ot’en territories and that corporations, investors, and governments have no jurisdiction to approve development on their lands.

On November 20, Wet’suwet’en Hereditary Chief Toghestiy intercepted and issued an eagle feather to surveyors from the Can-Am Geomatics company, working for Apache’s proposed shale gas Pacific Trails Pipeline. In Wet’suwet’en law, an eagle feather is used as a first and only notice of trespass. The surveyors were ordered to leave the territory and the road entering into the territory has been closed to all industry activities until further notice.

Since July of 2010, the Wet’suwet’en have established a camp in the pathway of the Pacific Trails Pipeline. Likhts’amisyu hereditary chief Toghestiy states, “Unist’ot’en and Grassroots Wet’suwet’en have consistently stated that they will not allow such a pipeline to pass through their territory. The federal and provincial governments, as well as Indian Act tribal councils or bands, have no right or jurisdiction to approve development on Unist’ot’en lands. By consulting only with elected Indian Act tribal councils and bands, the Canadian government breaks its own laws as outlined in the 1997 Supreme Court of Canada Delgamuukw decision which recognizes Hereditary adjudication processes.”

Freda Huson, spokeswoman for the Unist’ot’en Clan, states: “Pacific Trails Pipeline does not have permission to be on our territory. This is unceded land. Through emails and in meetings, we have repeatedly said NO. Pacific Trail Pipeline’s proposed route is through two main salmon spawning channels which provide our staple food supply. We have made the message clear to Pacific Trails, Enbridge, and all of industry: We will not permit any pipelines through our territory.”

Brigette Depape, known as the Rogue Page for standing up in Senate with a Stop Harper sign, is lending her support to the Unist’ot’en, “I believe we will stop the agendas of reckless governments and industries because of strong leadership from communities like the Unis’tot’en as they take action against irresponsible pipelines.”

According to the Canadian Center for Policy Alternatives, much of the shale gas produced in BC is currently destined for Alberta, where it is used as fuel in the tar sands. While industry sells fracking as a “green transition fuel,” Robert Howarth from Cornell University emphasizes that “Shale gas is worse than conventional gas, and is, in fact, worse than coal and worse than oil.”

The Council of Canadians, one of Canada’s largest organizations, is supporting the day of action. Chairperson Maude Barlow has recently written, “The Enbridge Northern Gateway, Kinder Morgan Trans Mountain and the Pacific Trails Pipelines would put the economic interests of industry ahead of people and communities. These pipelines would add more tanker traffic to BC’s pristine coastlines, expand fracking and tar sands industries, increase climate pollution and greenhouse gas emissions, and violate First Nations rights to hunt, trap, and fish on their land and to make decisions about the future of their traditional territories. We need to do everything we can to turn the tap off to these pipelines.”

Judy Da Silva of the Asubpeeschoseewagong (Grassy Narrows) Land Defenders states, “The Asubpeeschoseewagong Land Defenders stand with the Unist’ot’en. When we come together to protect the land, we are doing it for all of our future generations. This government and all of industry needs to understand that no means no. We will not sacrifice our lands, cultures, and children for their greed.” 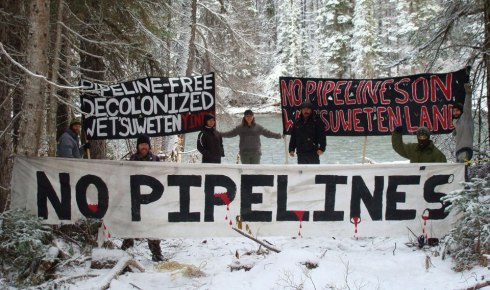 Pacific Trails Pipeline: Pacific Trails Pipeline is a $1 billion partnership between Apache Canada, Encana Corporation, and EOG Resources (Enron Oil and Gas). Royal Bank of Canada, the largest financier of oil and gas companies operating in the tar sands and the second largest financier of Enbridge, is also a major investor in Encana. In fact, David P. O’Brien, Chairman of the Board of Encana, is also the Chairman of the Board of Royal Bank of Canada. The 463-kilometer pipeline would connect a liquefied natural gas terminal in Kitimat to Summit Lake near Prince George in northeastern BC, with the aim of transporting upto 1 million cubic feet of natural gas per day extracted through hydraulic fracturing of shale gas (fracking), to international markets through supertankers. The BC government approved the pipeline’s expanded capacity in April 2012.

Asubpeeschoseewagong Land Defenders: This week marks the 10 year anniversary of the Grassy Narrows Asubpeeschoseewagong Anishinabek blockade in northern Ontario. For the past decade, the community has maintained a blockade that has held off some of the world’s largest paper corporations from logging their territories.

Smithers, Unceded Gitdumden territory: Noon at the Royal Bank on Main and Broadway.

Toronto: 11 am. Demo at Royal Bank Headquarters, Bay and Front.

For a full list of actions and more information:
http://unistotencamp.wordpress.com/2012/11/23/solidarity-actions/

I am a Tlingit, born and raised in Tlingit Country, and a proud member of the Tlingit Nation.
View all posts by Vince →
This entry was posted in activisim, Decolonization. Bookmark the permalink.