Some Thoughts on George Zimmerman and John T. Williams 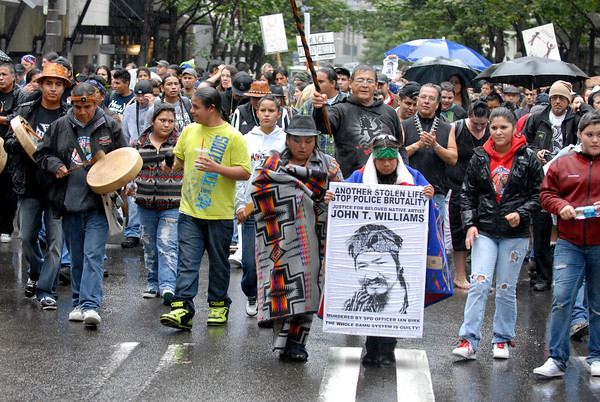 As the not guilty verdict of George Zimmerman was announced on July 13 I couldn’t help thinking about a similar shooting here in Seattle that was also caused by racial profiling, the shooting of First Nations carver John T. Williams by Seattle Police officer Ian Birk on August 30, 2010. Both shootings were heartless attacks on unarmed minorities. Both were needless and unjustified, and both triggered understandable outrage from the communities where they occurred. But the response by the Native community in Seattle to John’s shooting was far different than the rage felt after Zimmerman’s verdict.

In Seattle the urge to vent frustration and anger at the police was palpable. There had been several incidents of violence against minorities by Seattle police in the years prior to the shooting. Blacks, Latinos, and Native Americans had all suffered unfair treatment by Seattle cops. Minorities felt rage at being treated like sub-human animals who were to be controlled and kept in line.

I myself remember walking to the bus stop after I got off work one night as a police car with a K-9 unit inside slowly drove past with the dog in the window barking ferociously at me. I flipped them off and wished I had a rock to throw. I was just a street Indian walking alone at night and police officers were training their attack dogs to go after people who looked like me. “Get ’em, Sparky! Go get that Indian!” I could almost hear that cop telling his dog.

It wouldn’t have taken much to get me to join a mob to turn over cop cars and smash windows. And I wasn’t the only one. In the weeks following the shooting John’s family were continually harassed by Seattle Police where they worked and sold their art at Seattle’s Pike Place Market. John’s older brother Rick states that a cop told him, “You people need to learn how to obey.” And when another Williams family member asked a cop, “Will you shoot me too?” the cop replied, “You don’t want to test that theory now, do you?”

The protest marches after John’s shooting could have easily turned violent had it not been for the kind heart of John’s brother, Rick, and his lawyer Andrea Brenneke. They organized a Restorative Circle to address the bitterness and anger the Natives felt against Seattle Police. This method is based on the restorative justice work developed by Dominic Barter in Brazil.

On September 13, 2010 John’s brothers Rick and Eric met with members of the Seattle Police, including then Police Chief John Diaz. They met in a Native American healing circle in the Chief Seattle Club, a social-service agency. Diaz and the cops agreed to take off their badges and guns and listen to John’s family.

Rick and Eric described how they were seventh-generation carvers. Their family had been selling work in Seattle for nearly 100 years. They described how they lived in fear of reprisals from the cops due to all the outrage from the community. They expressed anger that they were not respected, as if the police thought their ancient way of life was not valid and their people disposable.

At one point Rick asked what everyone wanted to ask, “Who gives you the right to play God?”

The cops heard and according to witnesses they were moved by what they were told. John’s family faced them and spoke to them. They forced the cops to see that they were humans with human hearts and emotions. They didn’t speak to them through lawyers, they didn’t offer a deposition in front of a court reporter. They spoke to them, man to man, face to face, eye to eye.

Officer Birk eventually resigned, although no criminal charges were ever filed against him. Chief Diaz later resigned as well after a Federal review of the Seattle Police showed a pattern of unwarranted violence against minorities. New programs were put in place to increase the understanding and sensitivity of police officers to minorities in the community.

Now on Facebook I see postings that George Zimmerman is a marked man who will be shot. I share the outrage, but wonder how much better it would be for Trayvon’s family and other members of his community to face George and simply tell him directly how his actions have devastated them, how they will never be the same, how they now fear simply walking down the street.

I wonder if the modern world with all its compartmentalization and disconnection can ever learn from the actions of an ancient Native people. I wonder what George would say if someone asked him, “Who gives you the right to play God?”

I am a Tlingit, born and raised in Tlingit Country, and a proud member of the Tlingit Nation.
View all posts by Vince →
This entry was posted in Frank Hopper, John T. Williams, Rememberance. Bookmark the permalink.

6 Responses to Some Thoughts on George Zimmerman and John T. Williams